Do as Romans do. Apparently they walked a lot. Nonetheless, Rome was wonderful. As soon as we arrived in Rome we were greeted by our kind host, Elisabetta. She was the absolute sweetest! After giving us a brief on how the busses worked and handing us the map, we were off! The sights of Rome were amazing. I’ve always been intrigued by the Roman history so walking around all of the ruins was right up my third grade history nerd ally. Ben told me I looked like a watermelon this day. After earning our dinner full of bread we found a restaurant off the beaten path a bit, which has always proved to serve us well. Ben had been wanting lasagna this entire week and finally got what he wanted. I, on the other hand, have been wanting vegetables all week, so I found them in a calzone. I can’t really complain. Ben and I don’t mess around when it comes to gelato. We do our research. I’ll spare you the search and tell you right now- go to Gelateria Della Palma. So many flavors. It’s this ice cream loving girl’s dream come true. The next morning we woke up to a wonderful Italian breakfast made by Elisabetta. Coffee, bread, jam, ricotta, yogurt, and fresh squeezed orange juice was quite the way to start our day. Then off we were on our morning runs. I know I have said this before, but running in each new city has truly been Ben and I’s favorite way to explore. Elisabetta mapped out the best runs and showed us how to get to Campo di’Fiori where their Sunday market was taking place. We passed by the most beautiful panorama of the city, ran along the river, through the narrow side streets, and finally to our destination. We made our own little trail mix from the local vendors and had fresh squeezed pomegranate juice to share. Our original intentions were to bus back, but we decided to run a bit farther. Father turned into the Colosseum. A dream come true I tell you. It is so, so big. 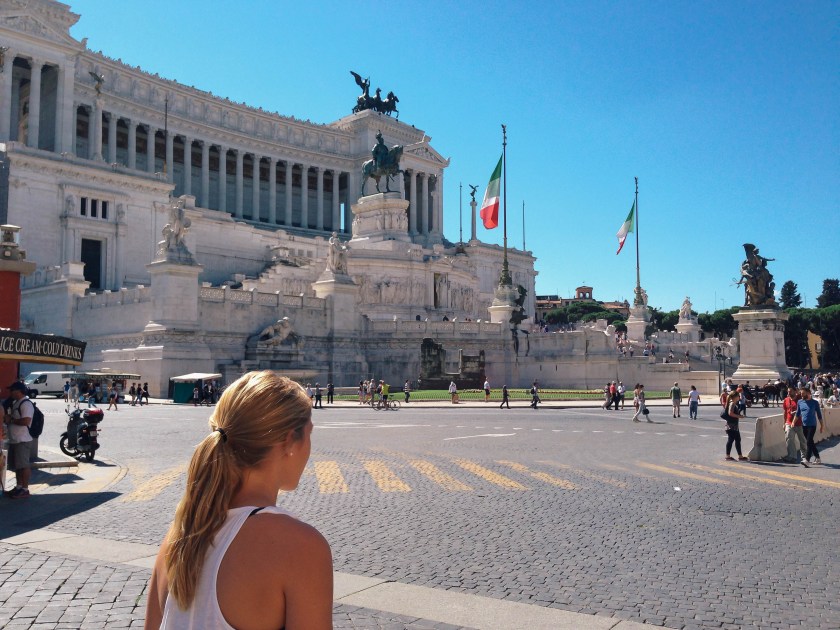 After finally getting back to the house we freshened up and headed to Trastevere (literally means “this side of the river”). Trastevere is a quainter part of Rome and allows you to get away from a lot of the crowded streets. It was a nice break, and a lovely lunch. After lunch we looked around the markets and wandered through the colorful streets. We spent the evening wandering around Rome until our legs told us “no more”.

The next morning was filled with another wonderful breakfast and time sharing our wedding pictures with Elisabetta which was so fun! She told us of a the largest park in Rome that was nearby and said it was a beautiful place to run. So, we put on our shoes and went for it. It was a nice change of pace from running on crowded streets to the paths in the park. Then it was off to the Vatican after a lunch nearby! Funny thing is… only half of us got to see St. Peter’s Basilica. (Me.) As we were waiting in line Ben said he would be right back and then all of a sudden we were separated. The line continued inside, and so did I. Bummer for him because it was BEAUTIFUL! Everyone else was taking a selfie.. so I did too. 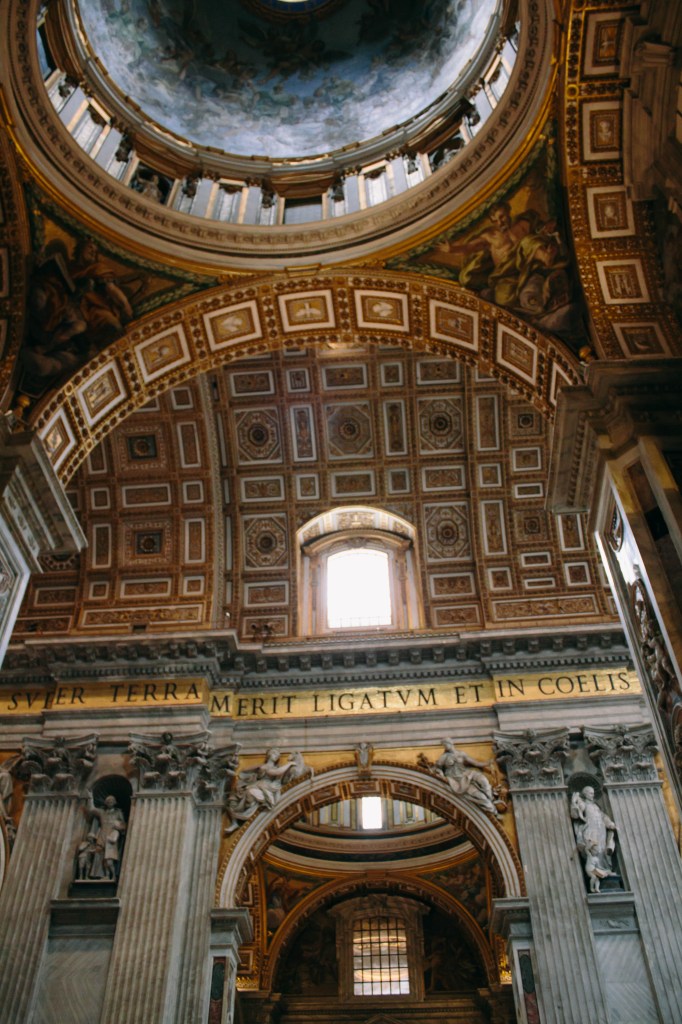 By this point we searched for the Spanish Steps for the sole purpose of simply sitting down. 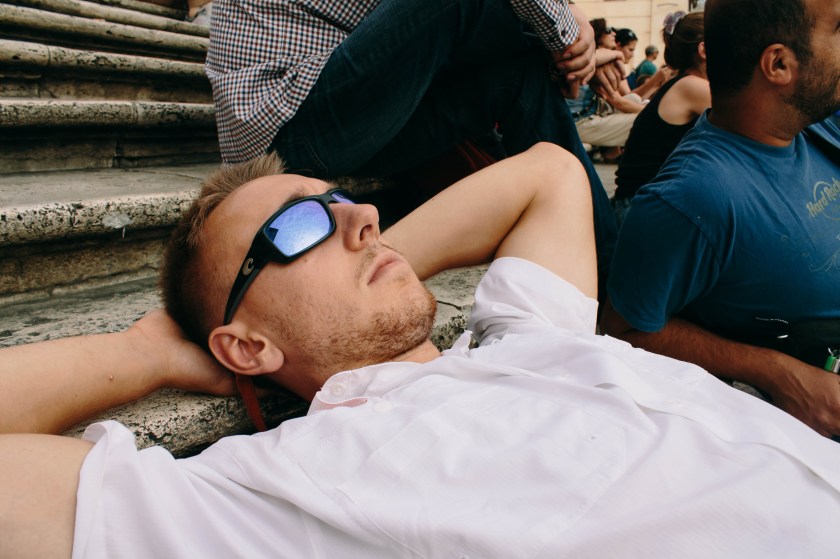 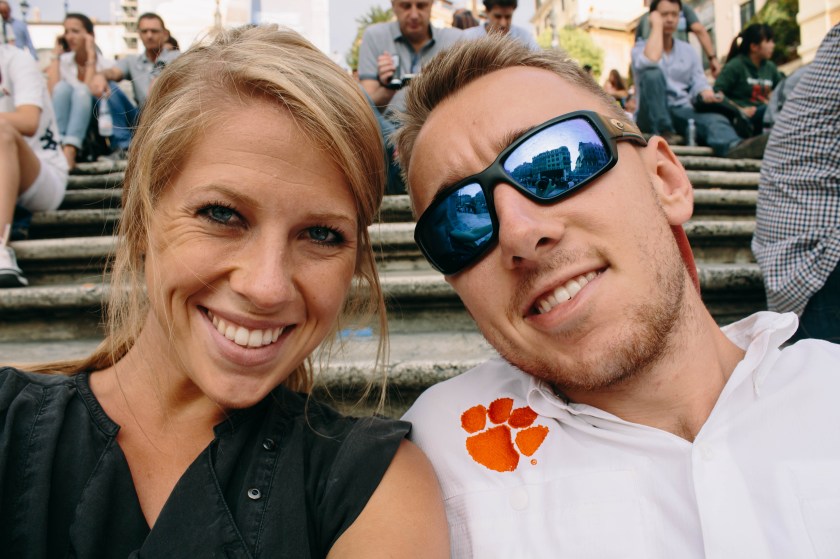 We kept seeing signs for Apertivo everywhere and wanted to figure out what this was. The answer is gold. It’s apparently all the rage now in Rome. You buy a drink and then they put out a buffet of food for you to snack on. I’m not talking chips and dip. More like couscous salad, vegetables, bread, fruit, salad, and a million other versions of rice salad. So cheap, and so good. 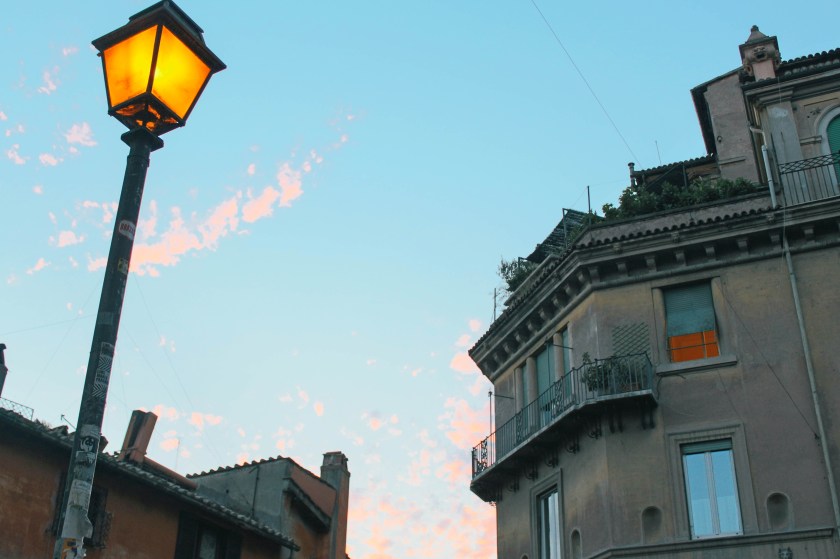 All in all, Rome lived up to the hype. Walking around the ruins was my all time favorite and enjoying a lot of pizza came in close second.