Tuscany you have been so kind to us.

After leaving Cinque Terre, Ben and I took a train to Florence. I’m not exactly sure what I expected from Florence, but apparently not enough. As soon as we started to wander around I could not help but just look everywhere in awe. I mean up, down, behind, across, everywhere you look it is so, so beautiful. Not to mention the smells and sounds. Florence smells and sounds like the epitome of Italy. As you walk through the streets you can hear the clinking of silverware, the smell of fresh croissants, sweet aromas from gelaterias, the sound of street performers playing accordions, and smells of pizza. I wouldn’t mind that combination any day. The architecture was beautiful. So intricate, so unique. Exploring together has been such an adventure, journey, and learning experience and I am really thankful for him. It’s been filled with a lot of laughs and maps, and a few “no, I think it’s this way”s. The bridges in Florence were my favorite. Walking night or day, the reflections were lovely. And that was day one- filled with sunshine, unlike day two. Ben and I were rudely woken in the night with the loudest BANG I have ever heard. To say we were startled is an understatement. I would use the word terrified. Turns out when it thunderstorms in Florence the acoustics of the city carry that rumble all the way through every street and seem to shake the buildings. Goodness it was so loud. We woke up with the rain still falling and power out, but decided (after maybe sleeping in a bit… details, details…) the rain would not stop us from exploring a bit more. The first order of business was to find a nice little bakery for a cafe latte. The rain finally let up a bit and we travelled up to the Piazza del Michelangelo for a breathtaking view of the city. You don’t realize how big it is until seeing it from afar. Florence, and Italy in general, is known for its fashion. Ben and I walked around as Florence’s worst dressed all day though. Hello large tshirt, Chacos, and rain jacket. I have no idea how people managed to still look trendy. You certainly can’t win them all. Just like only being able to take my iPhone around for pictures and not capture the best pizza we have ever had, or the sandwich Ben ate that was the size of my face. We woke up early the next morning and went on a little run and then off to Siena by train. Siena has been such a nice change of pace. After non stop going, the quaint and quieter streets of Siena offered a little rest. We arrived and ate a really late, really great lunch. La Prosciutteria makes a mean tasting board. The thing was massive and came with the best bread (you really can’t go wrong here). A whole lot of new tastes and flavors to try. So much so, dinner wasn’t even necessary. (Okay, we did have gelato.) 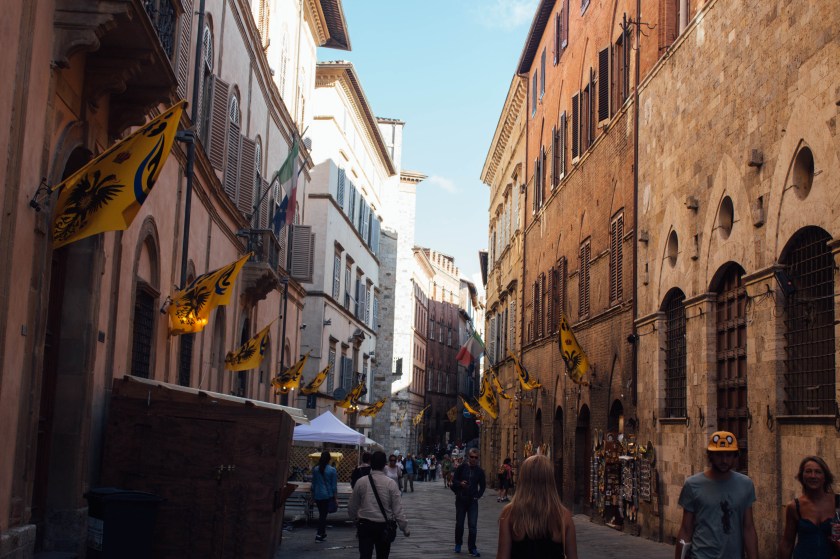 This morning when we woke we heard the rain yet again. But frankly, we weren’t too upset about it. In fact, we had the slowest of mornings and had breakfast partly made by our sweet host, and then sat some more. Then we headed to a coffee shop near by where they had a little croissant and caffe latte deal which is so hard to say no too. We sat some more, read, and chatted until heading back to the room. The sun decided to show up this afternoon and we decided to go for a run to hopefully help all that bread we have eaten and our lack of any activity all day. I assure you running is the best way to explore a new place. The views were wonderful and we were able to reach the outskirts of town to see some of the parts we hadn’t the day before. We finished our evening make dinner back in the apartment and relaxing some more. It’s been real, Siena, and Rome, we are ready for you tomorrow! 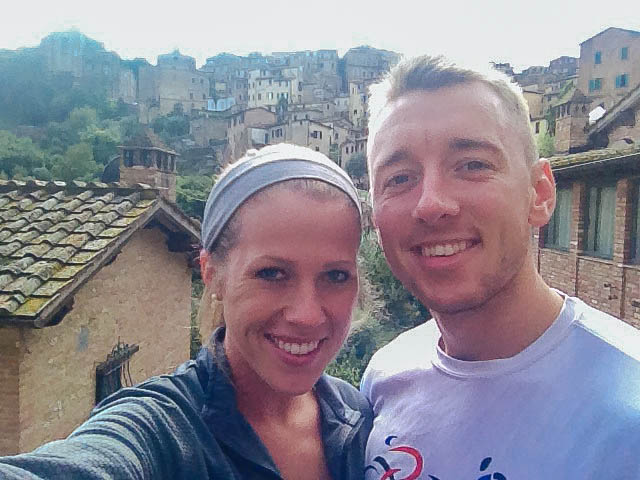 P.S: See what I did there with the title?